PRESENTING THE ENSEMBLE POSTER FROM ‘THE LEGEND OF MAULA JATT’ After sharing individual character posters from the upcoming film, The Legend Of Maula Jatt, the creators have now released a poster featuring the ensemble cast characters – Fawad Khan, Hamza Ali Abbasi, Mahira Khan, Humaima Malick, Ali Azmat, Mirza Gohar Rasheed, and Faris Shafi.
Actor Fawad Khan, says about the film, “”The Legend of Maula Jatt is like a poetic homecoming for me. We have broken a lot of norms of mainstream cinema, which gives the film a very unique position. The kind of dialogues written by Nasir Adeeb Sb – it feels like the entire film is a piece of poetry.
The Legend of Maula Jatt will not only be remembered for being the most ambitious film of Pakistan in recent history but also because each department of the film has done something extremely unique, making it a film you would want to see on your library shelf.”
Director Bilal Lashari says, “It’s not easy putting into words what all it took to make this dream a reality. I am proud of what we have created and hope our audiences feel the same. Couldn’t be happier to see this journey come full circle on October 13.”
Producer Ammara Hikmat says, “The excitement around this film is organic, the anticipation is genuine. This is the most rewarding part of this film release. The film is nothing like what we have seen in Pakistani Cinema before. It is a larger than life, visual extravaganza. We have aimed to deliver perfection in every department and hope that it will be loved and remembered by the audiences.”
This powerful, epic hero origin narrative is a hard reboot of the 1979 cult hit Maula Jatt, directed and with a screenplay by Bilal Lashari and lines by Nasir Adeeb.
The Legend of Maula Jatt is produced by Ammara Hikmatunder the joint venture of Encyclomedia and Lashari Filmsin partnership with AAA Motion Pictures. Nadeem Mandviwalla of Mandviwalla Entertainment, who is renowned for his contribution to cinema, oversees distribution. Moviegoers Entertainment will release the film internationally.
The Legend of Maula Jatt releases in cinemas on 13thOctober 2022.
Watch the official The Legend Of Maula Jatt trailer here: https://www.youtube.com/watch?v=pEWqOAcYgpQ 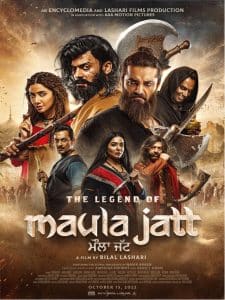