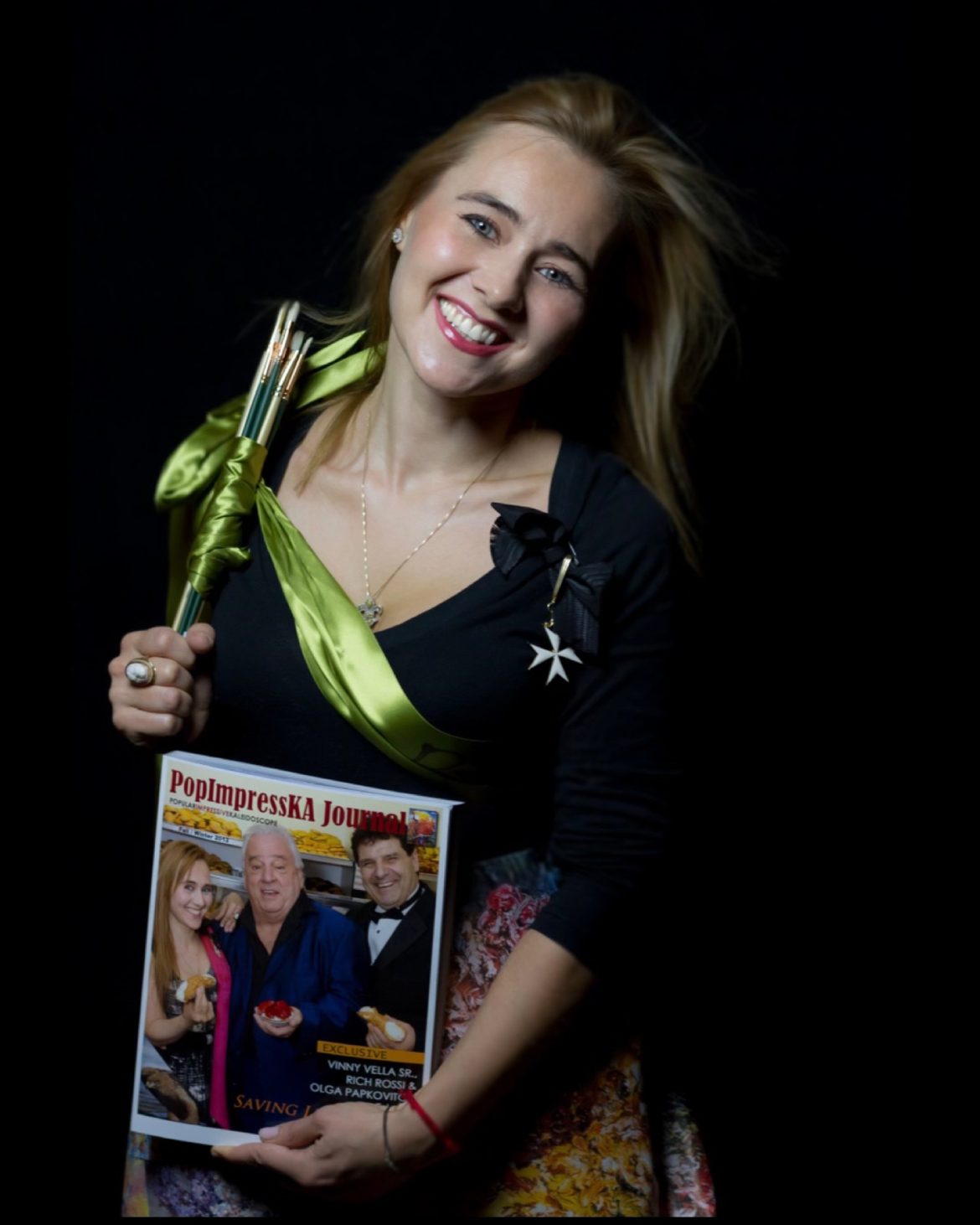 Awesome TV Welcomes, Awesome Top Model Judge, Olga Papkovitch (Olga Mikhailovna Papkovitch, Baroness Olga Papkovitch Von Siebenburgen, as a Judge for Awesome Top Model, who is an American Artist, Designer, Magazine Publisher, and Humanitarian, holder of titles: S.E. Dame, Dame at the Rank of Grand Cross the Royal Order of the Lyon, Dame of the Order of St. John Of Jerusalem Russian Grand Priory,Baroness, Dame Commander of the Society Of the Dragon with further honor of Dame Seneschal of the Equestrian Order of Saint Michael, Baronessa Di Ordona.
Her PopImpressKA Art Collection by Olga consists of over 100 of her paintings. She has been exhibiting nationally and internationally and has her art pieces in Museums around the world, such as Marina Tsvetaeva Memorial Flat & Museum Cultural Center in Moscow, and the State Museum of Arts of the Republic of Kazakhstan.
In 2008 she founded company brand PopImpressKA (Popular Impressive Kaleidoscope). In the same time, she first introduced her collection of clothes and accessories under this brand. She put her copyrighted original art pieces on silk in a form of a quilt and combines them with a variety of silks and other materials. She designs dresses, skirt, blouses, shirts and very original one of a kind wearing pieces. Her clothing collection also includes bags, as well as ties and bow ties and vests for man. She introduceв her PopImpressKA collection at Style Fashion Week, New York in 2016. She is currently CEO and founder of PopImpressKA Journal, an art and fashion magazine Journal, which focuses on starting artists and helping people move forward in their careers.
Olga has been involved in a wide array of charities. Including art auctions raising a generous quantity for children with cancer foundation and the Royal Marsden Hospital in London , one of the most highly praised Charities of Princess Diana. Brianne Helfrich, the Canadian model, humanitarian and cover model of PopImpressKA Journal, will be opening and closing the show at Gotham Hall.
Working with Royal Families, She did the last interview from King Kigeli V of Rwanda in October 2016. She worked in Royal Marsden Hospital in London, under Prince William, Duke of Cambridge, Prince Harry, Duke of Sussex, she wrote the story of the Alexander, Crown Prince of Yugoslavia and Katherine, Crown Princess of Yugoslavia. She did a story and personal interview about the family story of Don Leopold Nicolaas Isu Nisnoni, The Raja of Kupang and Liurai of Sonbai–Kecil. She did a story of Prince Mario Max Schaumburg-Lippe In gratitude for this work, the royal families awarded her titles.
Facebook   Pinterest   Twitter   Google+
Awesome Top ModelfashionNYFW