Actress Janhvi Kapoor announced on social media on Friday, November 26, that the shooting of her upcoming movie, Mili is completed. It should be noted that the actress has never collaborated with her father, Boney Kapoor, before. Janhvi Kapoor wrote a lengthy letter to her father in honour of the great experience she had working on this ‘special movie,’ giving a flood of recollections from the set.
Janhvi Kapoor captured a few scenes from the movie in a collection of photos for her Instagram post. Her pictures, which she posted online, show everything, from the initial scene to spending time with her father.
Produced by Zee Studios, Boney Kapoor and directed by Mathukutty Xavier, Mili is scheduled to release in cinemas on 4th November 2022.
Watch the official Mili trailer here: https://www.youtube.com/watch?v=F9rnpoAwNsE 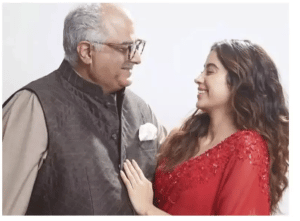