Team of ‘Raksha Bandhan’ takes Dubai by storm – Akshay Kumar, Aanand L Rai & cast promotes the movie in style!
Aanand L Rai’s highly anticipated movie ‘Raksha Bandhan’ is gearing up to be a huge blockbuster. While the promotional activities of the movie is in full swing, the makers including producer Aanand L Rai and superstar Akshay Kumar along with the cast are leaving no stone unturned to ensure maximum buzz for the movie across the globe.
No wonder, the team of ‘Raksha Bandhan’ including Aanand L Rai, Akshay Kumar and the cast recently flew to Dubai to promote their film releasing on the auspicious occasion of Raksha Bandhan festival.
Interestingly, for the first time after pandemic, movie promotion at such a large scale has ever happened in Dubai. From interviews to visiting malls like City Centre Diera and addressing a mammoth crowd to showcasing the impressive trailer in a grand scale at the Intercontinental Dubai Festival City, the movie team had a whale of a time promoting the fm and interacting with the people and media.
Directed by Aanand L Rai, produced by Aanand L Rai and Himanshu Sharma in association with Zee Studios, Alka Hiranandani and Cape of Good Films, written by Himanshu Sharma & Kanika Dhillon, the music of ‘Raksha Bandhan’ has been composed by Himesh Reshammiya and lyrics are by Irshad Kamil.
Raksha Bandhan featuring Bhumi Pednekar, Akshay Kumar, Neeraj Sood, Seema Pahwa, Sadia Khateeb, Abhilash Thapliyal, Deepika Khanna, Smrithi Srikanth and Sahejmeen Kaur is all set to release on 11th August 2022. 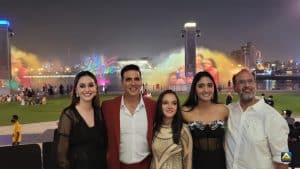